The most visited UK National Park, the Peak District is easily accessible from cities such as Manchester, Sheffield, Derby and Stoke-on-Trent. Mostly in Derbyshire, it extends into many neighbouring counties. It is estimated that almost a third of the UK population live within an hour’s journey.

The Pennine Way starts its northwards journey here, with many shorter local trails available to tackle. The northern end of the Park forms part of the Dark Peak, moorland with gritstone. This surrounds the White Peak of farmland and limestone. The famous 1932 Kinder Scout Trespass was a mass protest to open up the moorland for the public, leading to the creation of National Parks. About an eighth of the Park is now owned by the National Trust.

Bakewell is the only town in the National Park, with the historic spa town of Buxton and its much-visited Pavilion Gardens just outside the Park. The village of Casterton is noted for its show caves and caverns producing the semi-precious Blue John stones. Eyam village has the Eyam Plague Museum dedicated to the village lockdown and sacrifices in the Great Plague of 1665.

Chatsworth House, the seat of the Duke of Devonshire, and its grounds are normally open to the public whilst in compete contrast visit the leading theme park at Alton Towers, with rollercoasters and exciting rides.
The extensive and free-flowing rivers of the Peak District provided power for cotton mills, and are linked with Richard Arkwright’s inventions of new machinery feeding the Industrial Revolution. Many rivers have also been dammed to provide water supplies to cities such as Manchester, with Ladybower Reservoir a scenic highlight.

The Peak District is ideal for outdoor lovers exploring by foot or bike over the hills and by the lakes. As relatively high ground, the District has a high annual rainfall with frost and snowfall in winter.

Holidays in the Peak District

For where to stay in hotels, bed and breakfasts and cottages follow links to our specialist accommodation partners below:

Search for your holiday
cottage in the Peak District 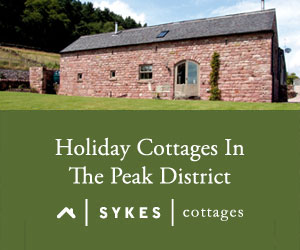 Search for a holiday cottage