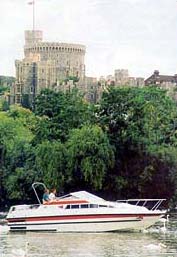 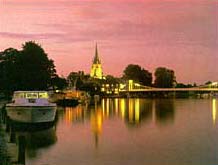 Perhaps England's most famous and historic river, the Thames takes you close by a number of major attractions including Richmond, Hampton Court, Royal Windsor, Legoland, Eton, Henley and many famous landmarks.

From Teddington Lock in west London the Thames can be cruised on a non-tidal 124 mile (200 km) section via Oxford to Lechlade in Gloucestershire. There are 44 locks, normally operated by lock keepers. Lock tolls are included in the Thames licence. Moorings are easy to find in villages and towns, mostly free. There are many riverside pubs and eating places.

Close to Teddington is Hampton Court Palace, famous as a residence of Henry VIII and now open daily. Cruise past Magna Carta Island and the great expanse of Runnymede with its memorial to President Kennedy.

Historic Windsor is 24 miles (40 km) from Teddington, with its 900 year old castle open when the Queen is not in residence. Nearby is the family attraction of Legoland, and Eton with its College, founded in 1440 by Henry VI.

The river continues west to Maidenhead, noted for its Brunel built railway bridge with wide brick-built spans, and pass the beech-wooded heights of Cliveden towards elegant Marlow. The Georgian town of Henley has many interesting pubs, and holds its famous Regatta in July.

The Thames meets the Kennet and Avon Canal near Reading, and becomes more peaceful as it heads through Wallingford and the ancient market town of Abingdon to reach Oxford with its historic University, 'dreaming spires', and Inspector Morse TV locations.

Above Oxford, the Thames flows through rolling countryside with more frequent locks to reach Lechlade.

Possible Holidays on the River Thames

In two weeks it is possible to travel the Teddington-Oxford section and back with some time for sightseeing. In one week it is possible to go out-and-back from Teddington to Windsor and beyond, or around the Oxford area. Short breaks are available on sections of the Thames.

Holidays in the UK has four cruiser boat bases on the River Thames. One is at Datchet, near Windsor, two are at Reading in the central part of the river, with the fourth at Benson near Oxford. Cruiser hire includes a River Thames licence.

Narrowboats can travel the river on routes from nearby bases (Thames licence is payable).

Search for a holiday cottage